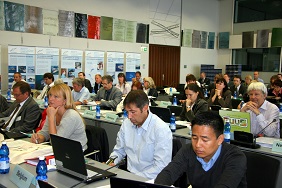 The 6th Meeting of the Parties (MOP6) to the Agreement on the Conservation of Small Cetaceans of the Baltic, North East Atlantic, Irish and North Seas (ASCOBANS) will take place at the Secretariat's seat in Bonn, Germany, from 16-18 September 2009.
Representatives of the 10 ASCOBANS Parties, as well as of non-Party Range States and intergovernmental and non-governmental organisations qualified in cetacean conservation and management, will meet to progress the conservation of small cetaceans in the ASCOBANS Agreement area. Intergovernmental or non-governmental organizations interested in attending MOP6 should send a request for admission to the Secretariat no later than 18 June 2009.
The Meeting of the Parties is the decision-making body of the Agreement. It meets every three years to assess progress and develop further steps in the implementation of ASCOBANS. The agenda of the meeting will include important issues such as a revised version of the Recovery Plan for Baltic Harbour Porpoises (Jastarnia Plan); a new Conservation Plan for the Harbour Porpoise in the North Sea; a Communication, Education and Public Awareness Plan for ASCOBANS; a possible new format for the Annual National Reports; the possible inclusion of all cetacean species occurring in the Agreement area in the treaty; anthropogenic underwater noise; criteria and guidelines for the establishment of marine protected areas for cetaceans; and scientific findings on small cetacean population structure in the Agreement area and the implications for conservation.
Based on strategic considerations on the future of the Agreement, Parties will also decide on a work plan for the years 2010-2012, which includes activities for the Secretariat, the Advisory Committee and the governmental institutions in the Party States, as well as the budgetary and administrative provisions for the Agreement for the next three years.
Documents for the meeting will be posted here.