18th Meeting of the Jastarnia Group 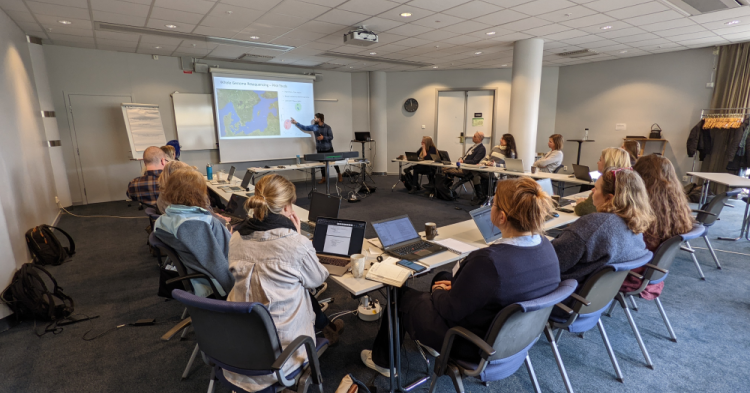 Bonn, 11 April  2022 – For the first time in nearly three years, participants could gather for a face-to-face meeting of ASCOBANS again. The 18th Meeting of the Jastarnia Group* took place in Gothenburg, Sweden, from 28 to 30 March 2022, and was also attended by a small number of online participants.

The meeting heard about the progress under the Jastarnia Plan and the Western Baltic, Belt Sea and Kattegat Plan. Country representatives provided overviews of key activities in their countries. Members discussed the extent of implementation of the plans, shared successes and identified challenges, and prioritised actions.

Discussing measures to mitigate bycatch of the Baltic Proper harbour porpoise, BALTISH announced that dialogue on a third Joint Recommendation about possible additional safeguards measures were ongoing. It was also highlighted during the meeting that the complete closure of already identified key areas, during certain time periods, would be perhaps the only solution to minimize bycatch.

The Meeting also heard updates on overview of HELCOM matters related to harbour porpoises, results of the Mini-SCANS II, and OSPAR approach for bycatch threshold setting:

HELCOM updated the participants on matters related to spatial conservation measures, and the conservation of species, as well as on themes directly related to harbour porpoises, such as underwater noise and fisheries management.

OSPAR had developed a mortality threshold for the indicator on bycatch for the Belt Sea population of harbour porpoises, by using a modified version of the Potential Biological Removal (PBR), originally developed under the United States Marine Mammal Protection Act. The threshold was obtained by tuning the original PBR to the ASCOBANS conservation objective of keeping harbour porpoise population at or restored to 80 % of their carrying capacity within 100 years.

On recent research by Johanna Stedt and Sara Ortiz on harbour porpoise behavior, which were observed with the use of drones, it was revealed that they are more social than previously thought, and seem capable of sophisticated collaborative behavior when hunting. Another study on genetic analysis by Enrique Celemin Amaro confirmed the previously identified three distinct populations in the Baltic Sea Region and indicated that there is considerable spatial overlap between populations.

The Meeting also reviewed the progress assessment criteria for implementation of the harbour porpoise plans, based on some of the changes made by the North Sea Group in its most recent meeting (January 2022). Updated criteria can be found in the report annex on the meeting webpage in due course. Participants also used the meeting to discuss a possible revision of the conservation plans of both Jastarnia and Western Baltic, and recommended the latter to be reviewed as a matter of priority. Action Points from JG18, intersessionally adopted by the ASCOBANS Advisory Committee, are on the ASCOBANS website. The meeting report will be posted in due course.

The next Jastarnia Group meeting is scheduled to take place from 20 to 22 March 2023. The meeting will be held online, as agreed by the Steering Group a few years back to hold every other meeting online.

*Jastarnia Group, i.e. the Steering Group for the ASCOBANS Recovery Plan for Baltic Harbour Porpoises (Jastarnia Plan) and the Conservation Plan for the Harbour Porpoise Population in the Western Baltic, the Belt Sea and the Kattegat (Western Baltic Conservation Plan) meets annually. It reviews progress under the action plans, learns about complementary initiatives, and aims to move implementation forward.