19 May 2013: Celebrating the International Day of the Baltic Harbour Porpoise 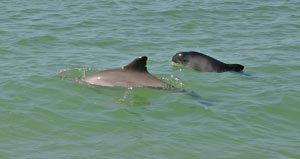 19 May 2013: Celebrating the International Day of the Baltic Harbour Porpoise

This year's International Day of the Baltic Harbour Porpoise (IDBHP) will be celebrated on the weekend of Sunday, 19 May 2013. It is the 11th time that this special day in honour of the critically endangered native whale species of the Baltic Sea is being observed around its shores.

In Denmark, a historical society interested in the past tradition of huting porpoises is working with the Forside Middelfart Museum and other partners to participate in the International Day of the Baltic Harbour Porpoise for the first time. Middelfart has a hunting tradition going back to the middle ages, with about 30 hunters going out every winter in ten boats hunting porpoises in order to use their blubber for producing lamp oil. This hunt took place until 1892. Nowadays, porpoises are a protected species in Denmark, and the society is using the local tradition as a way of highlighting the need to protect the species, which now has many threats to contend with. There will be a competition for children, historic exhibition, whale watching on the Belt and other activities.

The Saerkaenniemi Dolphinarium in Finland will, as in previous years, provide a variety of information and activities centring on the harbour porpoise for children and adults alike.

The ASCOBANS Secretariat has partnered with NGOs Whale and Dolphin Conservation (WDC), NABU and OceanCare for a competition targeting German-speaking areas. Details will be announced in a joint press release and will shortly become available online.

The Lithuanian Sea Museum is inviting primary class students to get to know the little whales of the Baltic Sea. During educational talks the children will learn about these rare Baltic Sea inhabitants and will also discuss with the museum's biologists the environmental issues threatening the species' survival. In addition, a creative workshop is being offered, during which participants will jointly prepare a sculpture dedicated to the Baltic harbour porpoise. This sculpture will be placed at the entrance of the Sea Museum.

Information about IDBHP events of previous years is contained in the Handbook, which can be downloaded here. All participating institutions are encouraged to report back to the Secretariat about their events. We will put a short report on the activities on this website and include the information and photos in the next update of the Handbook.