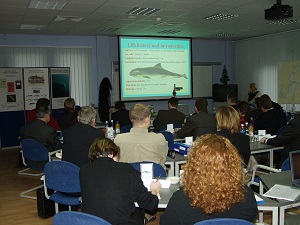 The ASCOBANS Working Group to take forward the implementation of the Recovery Plan for the Baltic Harbour Porpoise (also called Jastarnia Plan) will meet for the fifth time in February 2009. At the invitation of Finland, the participating experts from the environment and fisheries sectors from around the Baltic Sea, will meet in Turku. The Jastarnia Plan was finalised in 2002 in reaction to the critical conservation status of the only cetacean species native to the Baltic Sea, which despite strict protection on all political levels still experiences higher human-induced mortality than the small population can sustain. Besides discussing progress made and further priorities in the implementation of the Jastarnia Plan by the ASCOBANS Party States, the Group will also work towards finalising the revision of the Jastarnia Plan, which was started in 2007. We hope to have a new version ready to be presented to the Advisory Committee in April 2009.