ASCOBANS Advisory Committee Paves Way for Meeting of the Parties 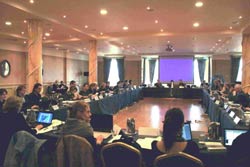 4 April 2012 - The 19th Meeting of the ASCOBANS Advisory Committee (AC), held from 20-22 March 2012 in Galway, Ireland, concluded with a list of action points and decisions. More than twenty government representatives as well as observers and invited experts discussed progress in the implementation of the decisions of the last Meeting of the Parties (MOP). They agreed on priority actions for the next months and prepared decisions to be taken at the 7th MOP, which will be held in October 2012.

In particular, intersessional tasks for working groups on bycatch and marine debris were set, as well as those for the joint working groups with ACCOBAMS on underwater noise and relating to the EU Marine Strategy Framework Directive. A Conservation Plan for the Harbour Porpoise Population in the Western Baltic, the Belt Sea and the Kattegat will be finalized and forwarded to MOP7 for adoption. This document will close an important gap in the coverage of the two action plans for the species already in place, which relate to the Baltic Sea and the North Sea.

At the 2013 Annual Conference of the European Cetacean Society (ECS), a joint workshop with ECS and ACCOBAMS will be held on the management of marine protected areas for cetaceans. The AC also determined funding priorities, since the Agreement is again in a position to support at least two conservation research projects in 2012. Further, first comments were made on draft decisions to be taken at the upcoming MOP.

A list of action points and decisions, as adopted by Parties at the end of the meeting, can be accessed here.