Bycatch – Still a Major Cause of Small Cetacean Mortality 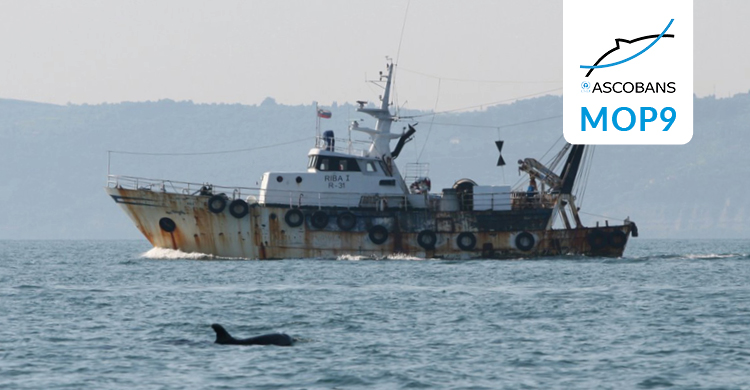 Bonn, 4 September 2020 – Despite the efforts made by Parties to date, bycatch remains a major cause of mortality for small cetaceans in the ASCOBANS Agreement Area.  The available data indicate that levels of bycatch – the incidental capture of non-target species in fishing nets - may threaten the conservation status of some small cetacean populations, such as the Common Dolphin and Harbour Porpoise.

The different levels of threat facing small cetaceans arising from bycatch vary depending upon fishing practices, the local occurrence of the species and their conservation status. Bycatch in fisheries is not only a threat to small cetaceans’ conservation status, but also affects other marine species and has significant animal welfare implications.

Recognizing the severity of the threat posed, the Conservation and Management Plan annexed to the Agreement states that modifications of fishing gear and fishing practices shall be applied in order to reduce bycatch where data indicate that the levels of interaction are unacceptable.

A Bycatch Working Group was first established under ASCOBANS in 2010 and evolved into a Joint Bycatch Working Group of ACCOBAMS and ASCOBANS in January 2019.  This Joint Working Group has several aims relating to mandates contained in the resolutions of the two Agreements such as providing updates on bycatch mitigation measures and their effectiveness, reviewing information on illegal, unreported, and unregulated fishing, and offering technical support when needed to facilitate dialogue with relevant bodies.  The Joint Working Group’s first meeting had to be postponed due to COVID-19.

The Joint Working Group provided extensive comments and feedback to the Food and Agriculture Organization of the United Nations (FAO) as a contribution to the development of the Technical Guidelines for Responsible Fisheries: Guidelines to reduce bycatch of marine mammals in capture fisheries.

Parties that are also EU Member States have obligations under the Habitats Directive to apply a system of strict protection as well as to monitor and reduce bycatch.  Other European legislation relevant to addressing bycatch include the Marine Strategy Framework Directive, the Common Fisheries Policy and EU Regulation 2019/1241 on the conservation of fishery resources and the protection of marine ecosystems through technical measures.

There is also ample scope for collaboration with a number of other international organizations dealing with small cetaceans and fisheries:

In May 2020, ICES advised that a series of fishery emergency measures be implemented, which include a combination of temporal closures of all métiers of concern and the deployment of pingers (acoustic deterrent devices) on pair trawlers in the Bay of Biscay to mitigate bycatch outside of the period of closure. A second emergency measure under consideration addressed the issue of bycatch of harbour porpoise in the Baltic.

“The harbour porpoise population of the Baltic Proper numbers no more than around 500 animals and is considered genetically distinct from those inhabiting the Danish Belt Seas to the west”, says Dr Peter Evans, Co-Chair of the Joint Bycatch Working Group. “In this region, they suffer mortality from entanglement in static gillnets. Even an annual bycatch of a single animal is too many for this critically endangered population.”

The forthcoming ASCOBANS MOP9 (to be held online from 7 to 11 September) will consider proposed amendments to Resolution 8.5 Monitoring and Mitigation of Small Cetacean Bycatch.