9 March 2021 - The kick-off meeting of the CetAMBICion (DG ENV/MSFD 2020) project - Coordinated Cetacean Assessment, Monitoring and Management strategy in the Bay of Biscay and Iberian Coast sub-region - took place today over Zoom.  Nearly 60 stakeholders joined the meeting over Zoom to hear introductions to the project and the EU Marine Strategy Framework Directive (MSFD) projects programme, briefings on the six work packages of the project, and plans for the first deliverables.

General objectives of CetAMBICion are to provide and coordinate the necessary scientific expertise and institutional capacity to (i) deal with the issue of non-intentional fishery bycatch of cetaceans and (ii) support the regular assessment of cetacean populations and habitat use, and thus take a decisive step forward towards the achievement of Good Environmental Status (GES) in the sub-region. 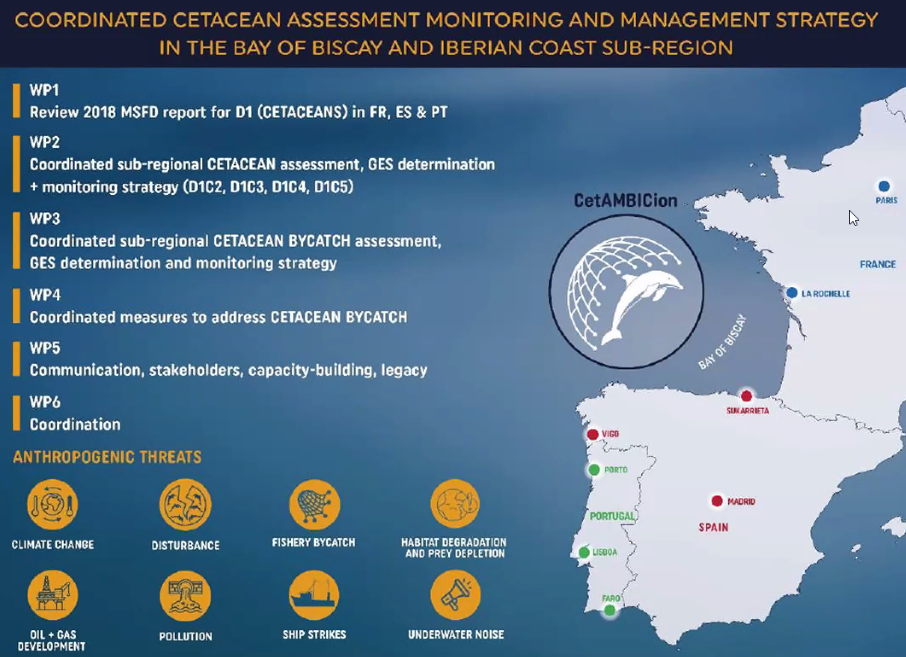 The project focuses on cetacean bycatch mortality, which is identified as a problem in several European Directives (e.g. the Marine Strategy Framework Directive) and international agreements, such as ASCOBANS.  Recent urgency stems from mass cetacean mortality events linked to fishery bycatch, the call for fisheries emergency measures in the Bay of Biscay and the Baltic and subsequeant actions of the European Commission.  Bycatch is an issue that remains difficult to solve, and bycatch mortality is hard to quantify - and its impact on cetacean populations is even harder to quantify, partly due to the difficulties of defining population limits and estimating abundance precisely.

It is anticipated that the project will contribute to better aligned environmental, economic and institutional objectives under the MSFD by bringing together competent authorities, research institutes and the fisheries sector, one of the most important sectors in this framework.  A risk asessment of bycatch of cetaceans in the Bay of Biscay and Iberian Coasts will be performed in order to provide a set of coordinated measures among the three countries.  Close link and knowledge transfer to relevant forums (OSPAR, ICES, ASCOBANS, ACCOBAMS, etc.) and policy makers will ensure that the outputs can go beyond the lifetime of the project.

CetAMBICion contributes to the implementation of ASCOBANS provisions, and project progress and results will be brought to the attention of the meetings of the ASCOBANS Advisory Committee.  The Secretariat is happy to support the project as feasible, including participating in its Advisory Board.  The lead coordinator of the project is Instituto de Investigacións Mariñas (CSIC), Spain.  The 24-month project started officially on 1 March 2021.