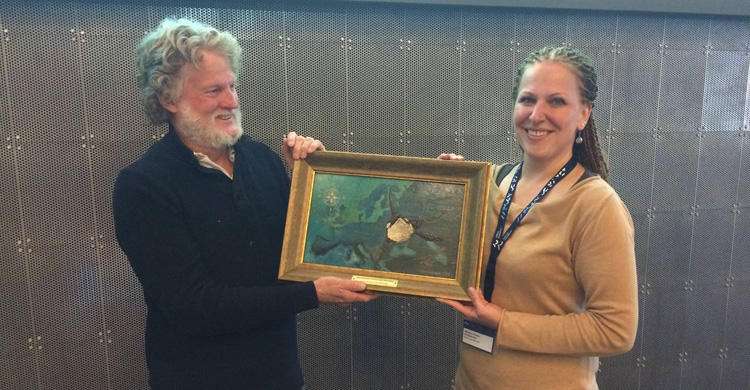 Bonn, 9 May 2017 - At the recent annual conference of the European Cetacean Society in Middelfart, Denmark, CMS staff member Heidrun Frisch-Nwakanma was honoured by being presented with the Mandy McMath ECS Conservation Award.

The ECS Award, named after passionate Welsh conservationist Mandy McMath who passed away in 2012, is given for an outstanding contribution to the field of marine mammal conservation and/or welfare, with particular emphasis on contributions to environmental education and/or to conservation in practice. Past recipients of the award include the late Prof. Krzysztof Skóra (2011), Dr Peter Evans (2012), Erich Hoyt (2013), Nick Tregenza (2014), Dr Giuseppe Notarbartolo di Sciara (2015) and Professor Hal Whitehead (2016).

In his laudation, Mark Simmonds of the Humane Society International said that while “conservation is hard to achieve …, it can certainly be inspired by lone individuals, but it takes coordination, cooperation, inspired bureaucracy, diplomacy and sheer hard-graft. The people who labour in the national and international bureaucracies trying to implement and effectively interpret the decisions taken by nations and political leaders to better protect, manage and conserve resources, are typically little recognized, but only if they do their jobs very well can appropriate outcomes be achieved.”

Ms Frisch-Nwakanma has been a part of the CMS Secretariat for over ten years. Until December 2016, she coordinated the Agreement on the Conservation of Small Cetaceans in the Baltic, North East Atlantic, Irish and North Seas (ASCOBANS), while dedicating a quarter of her time to marine and cetacean-related work of CMS.

“This is an award for a person but it clearly shows recognition being extended to those who labour largely out of the limelight, working diligently, carefully and often with what might be called a ‘focused inspiration’ and great dedication to bring together players, countries, regional bodies and others and getting them to work together to crystallize out something effective; something that will make a difference – so this is a salute to all those who work in in offices of the IGOs and the agencies” said Mr Simmonds when announcing the decision of the ECS Award Committee.

The full text of the accolade to the winner of the Conservation Award at the ECS Conference can be accessed at: http://mrsimmondssays.blogspot.de/2017/05/2017-ecs-mandy-mcmath-conservation-award.html.