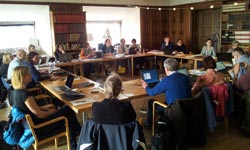 22 April 2013 “ Established to take forward the implementation of the Recovery Plan for the Baltic Harbour Porpoise (also called Jastarnia Plan), this expert working group met from 16-18 April 2013 in Gothenburg, Sweden, upon the kind invitation of the Swedish Agency for Marine and Water Management.
Under the chairmanship of Ruediger Strempel (Coalition Clean Baltic), the Group considered the progress made with respect to the various recommendations of the Jastarnia Plan. Also, for the first time the Group deliberated on the implementation of the new Conservation Plan for the Harbour Porpoise Population in the Western Baltic, the Belt Sea and the Kattegat, which was adopted by ASCOBANS Parties in October 2012.
The Group agreed recommendations to be forwarded to the 20th ASCOBANS Advisory Committee Meeting (27-29 August 2013, Warsaw, Poland), which identify actions to be taken and priorities for the effective implementation of the two Plans. Also, in a joint session with the project management team of SAMBAH “ Static Acoustic Monitoring of the Baltic Sea Harbour Porpoise, a Life+ funded project, the Group reaffirmed their full support for the project and their keen anticipation of its results, which will fill a very important information need regarding the distribution and abundance of the critically endangered Baltic sub-population of the harbour porpoise. Population densities are so low that traditional survey methods are not suitable for assessing this population. The project results will therefore be vital not only for increasing our knowledge of the status of this species in the Baltic Sea, but also for deciding on appropriate management measures.
The report of the meeting, including all recommendations agreed, will become available shortly and will be published on this website.