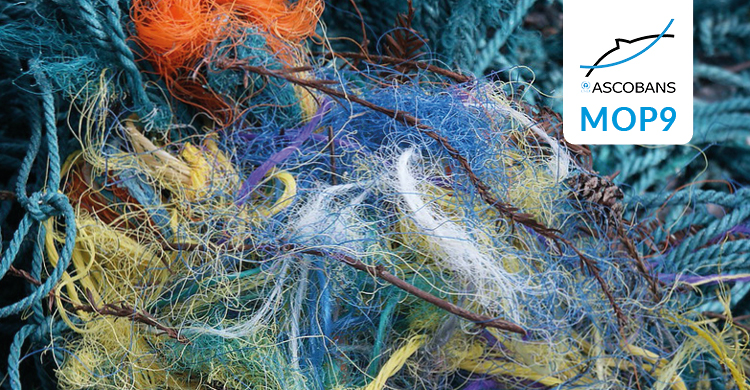 Bonn, 28 July 2020 – Worldwide, marine debris, which includes abandoned, lost or otherwise discarded fishing gear (ALDFG) and plastics, has a negative impact on a substantial number of marine animals. Ingestion of plastics and entanglement, including in ‘ghost nets’, are both increasingly giving rise to conservation and welfare concerns for cetaceans and other marine mammals.

Among the most effective ways of addressing these problems are preventing waste from reaching the marine environment in the first place and moving to a more circular economy, and reducing the amount of waste generated, is the only sustainable solution.

“There is an avalanche of marine debris heading towards the oceans, made worse by the global pandemic and careless disposal of associated single-use plastics. This will join the vast quantities of human-made materials already permanently located in the marine environment. Plastic wastes are cruelly killing vast numbers of animals and threaten the long-term viability of the marine ecosystems that all life on Earth depend on. All animals, from the largest of whales to the smallest of plankton are affected. Everyone can play a role in helping to counter this crisis. As individuals, we can be more responsible with our litter and our buying habits and, at government level, the right projects and incentives must urgently be supported to mitigate and reverse the arrival of plastics in the world’s oceans and seas, and remove those already accumulated there.”

Plastic makes up the bulk of litter entering the marine environment with more than 8 million tons reaching the world oceans every year.  Much of this originates from the two billion people that live within 30 miles of the coast.

The International Whaling Commission (IWC), with which ASCOBANS and CMS cooperate on a number of issues including bycatch and whale-watching, held its third workshop on marine debris in La Garriga, Spain in December 2019.  The workshop made detailed recommendations, including the need for standardized approaches to post-mortem studies, and agreed that the scale of the actual and rpojected increase in plastics is alarming.  The report of the workshop is available here.

Marine debris is also a theme addressed in the UN Sustainable Development Goals.  SDG 14 (life under water) sets targets for the prevention and significant reduction of pollution, including marine debris and nutrient pollution, which are to be achieved by 2025.

A draft resolution will be submitted to the 9th Meeting of the Parties (MOP9), encouraging Parties and non-Party Range States to collaborate on identifying, prioritizing and mitigating the impacts of marine debris on marine mammals.  The draft resolution will also call for efforts to end the use of single-use plastics across the Agreement Area and to address abandoned, lost or otherwise discarded fishing gear, through measures such as retrieval and recycling projects.  MOP9, originally scheduled to be held in Brussels, will now be held remotely from 7 to 11 September 2020.

ASCOBANS is the Agreement on the Conservation of Small Cetaceans of the Baltic, North East Atlantic, Irish and North Seas.  It is one of the daughter agreements of the Convention on Migratory Species (Bonn Convention) and entered into force in 1994. Since then, its Parties have met eight times, now on a four-year cycle, to assess the implementation of the agreement and decide what measures to take for better conservation of the species protected under it.  This article is part of a series showcasing some of the issues and resolutions to be discussed at the upcoming 9th Meeting of the Parties to ASCOBANS (MOP9).