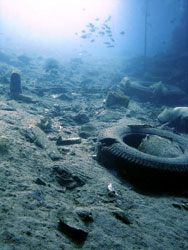 21 August 2012- Recognizing that the interactions between debris and cetaceans are not yet fully understood, the 19th Meeting of the ASCOBANS Advisory Committee (20-22 March 2012, Galway, Ireland) established an Intersessional Working Group on Marine Debris, which is to operate by correspondence. The terms of reference for the Group foresee the following tasks:

At first, the Group, which is being chaired by Marchien de Ruiter of the North Sea Foundation, will focus on the activities called for under 3 and 5, and then will give attention to item 1. More items will be addressed as time allows. A first progress report is due to be delivered to the 20th Meeting of the Advisory Committee in 2013.
On behalf of the Chair, the Secretariat is now calling for members for this Working Group. Besides addressing Members, Advisors and Observers of the Advisory Committee, the Group is also open for participation of external experts and would very much welcome such involvement. Interested persons should indicate their wish to be part of this correspondence group to the ASCOBANS Secretariat by 15 September 2012, stating their full name and affiliation.