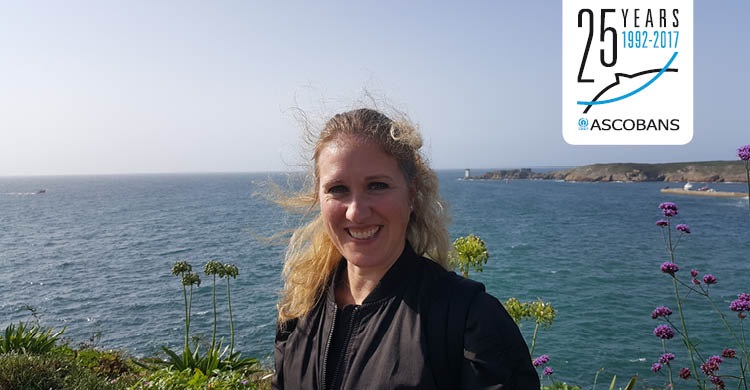 Involved with ASCOBANS since: 2003

I have been mesmerized by marine mammals since I was a kid, my favourite soft toys from age 3 were two seals. At that time, I had never seen a dolphin or a porpoise, being brought up mostly by the Baltic Sea. For very long I did not even know there was a whale in the Baltic! Eventually, after a few detours, I started studying biology, and my fascination with marine mammals led me to go into marine biology. I became increasingly interested in the Baltic Sea harbour porpoise, but when I had the chance to carry out my MSc thesis studying Indo-Pacific bottlenose and humpback dolphins with Dr Per Berggren on Zanzibar I could not resist. This was my first encounter with dolphins in the wild, and it was almost magical.

Back in Sweden, after finishing my MSc, the Baltic Sea harbour porpoise came into my focus again. While working for a couple of years at the Swedish Museum of Natural History I was involved in starting the reporting program for harbour porpoise observations there. This was when I attended my first ASCOBANS meeting, the Meeting of Parties in Esbjerg, Denmark, in 2003.

After starting a new job doing GIS work and species distribution modelling at AquaBiota Water Research, in 2007 I became involved with a group of people from Sweden and Finland who had just started planning what would grow to become the SAMBAH (Static Acoustic Monitoring of the Baltic Sea Harbour Porpoise) project in 2010. I count myself very lucky to have worked in SAMBAH, which has been immensely important to further the knowledge on the Baltic Sea harbour porpoise population and has given information to support conservation efforts such as the designation of a large Natura 2000 area in Swedish waters. Also, I am honoured to have worked with the amazing group of people involved in the project. I consider the SAMBAHrians to be my second family.

During the SAMBAH project period, I became increasingly familiar with ASCOBANS, attending meetings of the ASCOBANS Advisory Committee and the Jastarnia Group as a representative of the SAMBAH project and on a couple of occasions as part of the Swedish delegation. However, recently my role has changed since I joined Coalition Clean Baltic in spring 2016, and I now represent our members at ASCOBANS meetings, working from the perspective of an NGO to further the conservation efforts especially for the Baltic Sea harbour porpoise. I also try to keep one foot in science, slowly working towards a PhD which I started during the SAMBAH project.

In June 2017, I was elected as the new chair of the ASCOBANS Jastarnia Group. I am honoured and excited and I hope to be able to contribute to the implementation of the Jastarnia plan together with the experts in the group. Both for the Jastarnia group and for ASCOBANS as a whole, I hope that Contracting Parties and the people involved will continue to work together, becoming even stronger and more focused on implementing measures which will have a real effect on the conservation of cetacean populations in the Agreement area and the world.