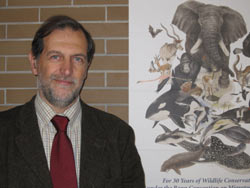 Bonn, 12 January 2010 - Borja Heredia has entered on duty as the new Scientific and Technical Officer at the CMS Secretariat. He will also serve as the ASCOBANS Senior Advisor, replacing Marco Barbieri in this function. Borja is well known to many in CMS circles as he has been Spain's representative on the Scientific Council, and has participated in several CMS COPs and MOU meetings, as well as being involved in other MEAs such as CBD and CITES.
Borja is a biologist with a PhD in Ecology from the University of Madrid. Since 1986 he has worked at the Spanish Ministry of Environment focussing on the conservation of threatened species, planning research, drawing up strategies and organising projects in the field. He has been involved in the conservation of several CMS Appendix I species including the Spanish Imperial Eagle, the White-headed Duck and the Mediterranean Monk Seal. The recovery of the Iberian Lynx has also been one of his main occupations in recent years. He also has experience of conflict resolution among different interest groups and has addressed many other factors affecting migratory species such as electrocution and invasive alien species.
From 1992 to 1995 he worked for BirdLife International in Cambridge, developing action plans for globally threatened birds of prey in Europe.
In relation to the marine environment, Borja has been involved in the designation of a marine protected area in the Bay of Biscay, the so called Le Danois Bank, a submarine mountain extremely rich in biodiversity. He has also been instrumental in the approval of an ad-hoc regulation for the protection of cetaceans in Spain. He has also been responsible of a project to cooperate with the Ministry of Defence in order to prevent damage to marine mammals due to the use of sonar for military purposes.