Striped dolphins are small pelagic dolphins and live in tropical to warm waters around the world. They are well-studied and known to be very social and acrobatic. They perform a variety of aerial behaviours, such as breaching and “roto-tailing” where they make high jumps while rapidly rotating their tail before entering the water surface. They occur in schools of several hundred to several thousand animals and sometimes approach moving vessels to bow-ride.

Striped dolphins have a characteristic slender body shape combined with a relatively long beak, which is well separated from their forehead, and they have a curved dorsal fin. The longest documented individual was about 2.5 meters in length and weighed 156 kg.

The name “coeruleoalba” refers to the pattern of blue and white stripes along the lateral and dorsal sides of their body. Their underbelly is usually white and their primary feature is a black stripe that runs along their full length and to their flippers respectively. There is also a dark blue patch around the eyes.

Striped dolphins feed on a variety of small pelagic and bentho-pelagic fish and squid.

The striped dolphin is well-documented in the western and eastern North and tropical Pacific as well as in the entire temperate and tropical Atlantic bordered by the Gulf Stream.

Due to their warm-water origin, they are rare in the ASCOBANS area and are most likely to be encountered southwest of the British Isles and in the English Channel. The SCANS II Project estimated that only about 160 individuals were present in the Agreement area in 2005.

Incidental catches have been reported in various fisheries throughout their range; recently there is concern of increasing bycatch occurring in the Bay of Biscay. They also suffer from marine pollution and habitat degradation, as other marine mammal species do. In the 1990s, large numbers of striped dolphins mass-stranded in the Mediterranean due to a measles-like viral infection.

Western North Pacific populations have experienced heavy mortalities from Japanese striped dolphin drive and hand-harpoon fisheries. Annual catches have reached 21,000 individuals in some years. Although it has been tried, striped dolphins have not been successfully maintained in captivity.

More information on the striped dolphin can be found at
http://www.cms.int/reports/small_cetaceans/data/S_ceoruleoalba/s_coeruleoalba.htm. 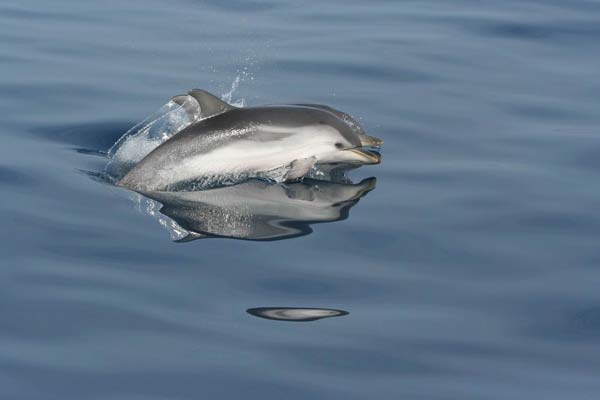