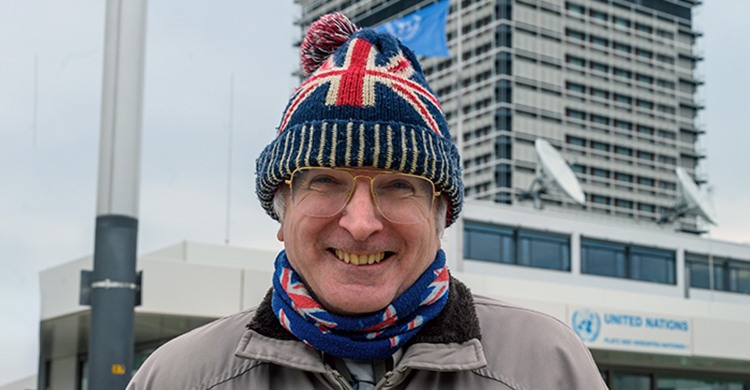 Bonn, 13 January 2021 – The CMS Secretariat is deeply saddened to announce that Robert Andrew Vagg, the Convention’s long-serving English language Editor and Report Writer passed away in the University Hospital of Bonn today.

His sudden and unexpected death is a tragic loss for CMS and the entire CMS Family. Robert, who was a UK national, initially joined the Secretariat in 2005 and has been working as principle writer and editor in the shared Communications Unit of the CMS and AEWA Secretariat since the creation of the Unit in 2014. He also served as the report writer to many CMS and CMS Family-related meetings, including many meetings of CMS subsidiary bodies such as the Standing Committee, the Scientific Council and its Sessional Committee as well as for AEWA, ASCOBANS, the Sharks, Dugongs and Raptors MOUs.

Over his many years at CMS, Robert accumulated a considerable knowledge of the workings of CMS and actively contributed to capturing the history and corporate memory of the Convention. In addition to his work as report writer and main language editor of the Convention (proofreading all official documents in the run-up to CMS meetings), he was also the principal writer and editor of the CMS Family Guide, a publication which was later used as basis for the award-winning book “Survival” -  a work he was very proud of and which he coauthored with one of the first CMS Ambassadors, Stanley Johnson.

Prior to working for CMS, Robert worked at Lloyds Bank (1984-1987) and joined the UK civil service in 1987, where he joined the Department of the Environment and worked on the Habitats Directive, the LIFE programme, and Joint Nature Conservation Committee (JNCC) – amongst others.  It was during his time at the Department of Environment, Food and Rural Affairs (DEFRA) when Robert was seconded to CMS in 1998 – 2001, after which he then worked in the team responsible for CMS and other MEAs at the Department.

Robert will be dearly missed and remembered by all of his colleagues and friends here in Bonn as well as by many people around the world. His presence, kind character and special humor will be sorely missed by all who have had the pleasure to know him.

Robert is survived by his parents and his brother Jeff. Our thoughts and condolences go to his family and to all his friends.

Messages of condolences to Robert’s family can be sent to cms.secretariat@cms.int.