25 Years ASCOBANS: The Birth of the Agreement 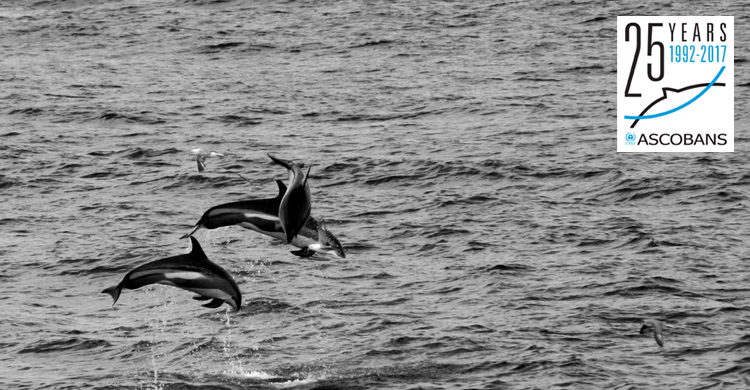 Bonn, 20 January 2017 – This year marks the 25th anniversary of the opening for signature of the Agreement on the Conservation of Small Cetaceans of the Baltic and North Seas (ASCOBANS) in New York on 17 March 1992.

Over the past 25 years, ASCOBANS has provided the framework for international cooperation for the protection of small cetaceans – whales, dolphins and porpoises – in northern and western European waters. But getting the Agreement ready took quite some effort.

The awareness for the need of protection of small cetaceans dates from the beginnings of the Convention on the Conservation of Migratory Species of Wild Animals (CMS). Back in 1985, scientists advised that small cetaceans be included into Appendix II as populations of the harbour porpoises of the Baltic Sea had drastically decreased and the amount of bycatch, habitat deterioration as well as disturbance was increasing constantly. Thus, at the first meeting of the Conferences of Parties (COP) the CMS Secretariat was instructed to take steps towards concluding an Agreement for the North and Baltic Sea populations of the harbour porpoise and bottlenose dolphin. Furthermore, seven small cetacean species also occurring in the North and Baltic Sea were added to CMS Appendix II at COP2 in 1988, despite Norway’s misgivings which led to a formal reservation concerning two of them.

Meanwhile, there was disagreement about the geographic scope of the proposed instrument. The Netherlands favoured focusing on the North and Baltic Seas to achieve speedy results, whereas Germany proposed a worldwide instrument for small cetaceans. Sweden took a leading role in the preparation process by hosting and organizing negotiation meetings and by developing a first draft of the Agreement text.  At the North Sea Ministerial Conference in The Hague in March 1990, a Memorandum of Understanding on Small Cetaceans in the North Sea was signed as an interim step towards concluding  a regional agreement. In response, Sweden as the lead country invited representatives of all Baltic and North Sea coastal States to Sigtuna in September 1990 to develop the Agreement.

In the course of negotiations, the original draft text was reviewed and revised several times. Species and geographic coverage, as well at the constitution of an Advisory Committee sparked a debate. Both practical and tactical considerations had to be taken into account. For example, it was eventually decided that the Agreement would cover all small cetaceans in the seas concerned and not only certain species, for two main reasons: they can be hard to distinguish for ordinary citizens or fishermen, and a species list would have contained also the white-sided and white-beaked dolphin – the two species Norway did not wish to see included.

The Final Act was concluded in September 1991 in Stockholm, and the Secretary-General of the United Nations agreed to act as the depositary. Accordingly, on 17 March 1992 the Agreement was opened for signature at the United Nations Headquarters in New York. It took two years for the required six states (in the event: Belgium, Denmark, Germany, Netherlands, Sweden and the UK) to sign and ratify the Agreement before it could enter into force on 29 March 1994. Despite their original interest and active participation in the negotiation, to date Norway has not joined the Agreement.

This is the first of 25 stories emphasizing milestones and special achievements of ASCOBANS throughout the year of its silver anniversary.

Acknowledgement: This year CMS has reached out to the Online Volunteering platform provided by United Nations Volunteers in Bonn to advertise graphic and design opportunities to support our communication work. A special logo had to be designed for the silver Anniversary of ASCOBANS to be used for success stories online and other communication products throughout the year. More than 20 applications were received amongst others from Mr. Sylvain Gilliand from Switzerland. Working as a freelance design director for internationally renowned clients, he has developed a highly professional portfolio. CMS and ASCOBANS were convinced by the quality of his graphic design and assigned him with the task to create the Anniversary logo. We thank him for his excellent work which helps us to raise the profile of ASCOBANS in its Anniversary year.