The harbour porpoise is one of six species of porpoises. It is the most abundant cetacean species in the North Sea and the only native species inhabiting the Baltic Sea and is the flagship species of ASCOBANS. As its name implies, it is a primarily coastal species but it regularly ventures up rivers and has been seen hundreds of kilometres from the sea.

Harbour porpoises are small animals with a blunt short-beaked head and a low wide-based triangular dorsal fin. Adults are usually less than 1.8m long and weigh from 45 to 70 kg. The dorsal area of the harbour porpoise is coloured dark grey while the chin, sides and the underbelly are lighter grey or white. Generally, harbour porpoises occur singly or in small groups of less than eight individuals. Occasionally, larger schools of up to several hundred animals have been reported.

The species is inconspicuous compared to most dolphins. It rarely approaches boats to ride on bow waves and seldom breaches or leaps from the water. Reproduction takes place from spring to mid-summer, and newborn calves measure 70 to 90 cm and weigh 5 kg.

Harbour porpoises feed opportunistically on a wide variety of ocean and deep-water fish as well as on marine invertebrates. Their main prey items appear to be schooling fish species, such as herring, sprat, mackerel or bottom-dwelling sand eels.

The species has a coastal circumpolar distribution in the Northern Hemisphere, including the North Sea and the Baltic. Porpoises from each ocean basin are reproductively isolated, resulting in the classification of at least two sub-species. The SCANS Project (Small Cetaceans in the European Atlantic and North Sea) aimed to estimate the abundance of selected small cetaceans. According to SCANS II (2005), over 350,000 harbour porpoises inhabit the surveyed portion of the ASCOBANS area.

The Baltic sub-population of the harbour porpoise is of particular concern. There has been a dramatic decline in the Western Baltic population from 36,000 individuals in 1994 to 24,000 individuals in 2005. The so-called Baltic Proper population amounts to not more than a few hundred individuals. This drop, observed since the 1930s, has been accompanied by a steady retreat from large areas of its former range. Today, Baltic harbour porpoises are generally restricted to the Kattegat and Belt Sea in the extreme west of their original habitat, with decreasing numbers of sightings along the German, Polish and Swedish Baltic coasts.

Harbour porpoises are highly mobile and encounter a variety of threats of which bycatch, accidental entanglement in fishing gear, is considered the most serious. Every year, several thousand porpoises in the ASCOBANS Area drown because they become ensnared in fishing nets, preventing them from coming up to the surface to breathe.

Like all marine mammals, harbour porpoises are highly dependent on their sense of hearing. They use sound for orientation, communication and prey detection. Accordingly, increasing levels of acoustic disturbance such as commercial shipping, industrial activity (e.g. pile-driving and seismic explorations), explosions and navy sonar activities are a significant threat to them.

More information on the harbour porpoise can be found at
http://www.cms.int/reports/small_cetaceans/data/P_phocoena/p_phocoena.htm. 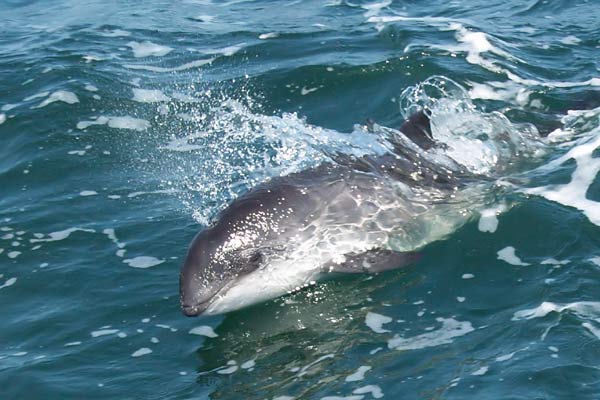