20 May 2012: The 10th International Day of the Baltic Harbour Porpoise 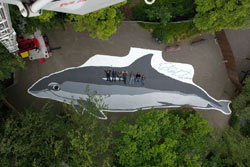 On Sunday, 20 May 2012, the International Day of the Baltic Harbour Porpoise (IDBHP) will be celebrated around the shores of the Baltic Sea for the 10th time.

The Fjord & Belt Centre in Denmark will show a special exhibition about the SAMBAH (Static Acoustic Monitoring of the Baltic Sea Harbour Porpoise) LIFE+ project, which will contribute to more effective conservation measures and population estimates for Baltic porpoises. The scientist, Magnus Wahlberg, will give a public lecture about harbour porpoise conservation in Denmark and the rest of Europe. The Centre will also run a quiz, where the visitors can win nice porpoise-inspired gifts, and serve porpoise-shaped biscuits from a local bakery.

In Finland at the Saerkaenniemi Dolphinarium the project leader for the Finnish part of the SAMBAH project, Olli Loisa, will give a lecture on the harbour porpoise. The dolphinarium will also be running a drawing contest for children.

The Meeresmuseum/Ozeaneum Stralsund is planning an event with posters and films providing information on the harbour porpoise, including the DVD 'Fishing and Pingers' produced in collaboration with ASCOBANS.

In Germany, the Zoo Duisburg will celebrate the IDBHP a little later, on 3 June. For the occasion, the blue whale-sized porpoise drawing created last year will be refreshed and information booths by various marine protection organizations will be erected to inform visitors. The ASCOBANS exhibition will also be shown, and information material distributed. Lectures are also being organized. In addition, a new permanent exhibition will be presented to the public, which will feature a 5-metre-high and 35-metre- wide net spread between three trees, in which 15 porpoise and dolphin species will be portrayed.

Zoologisches Forschungsmuseum Alexander Koenig in Bonn, Germany, will host the ASCOBANS Secretariat's IDBHP event, which at the same time celebrates the 20th Anniversary of the Agreement. An exhibition with life-sized inflatable whales, dolphins and porpoises will be shown from 18-22 May. School groups and other visitors to the museum will have the opportunity to experience the true size of 'small' cetaceans, hear short interactive presentations on the animals, the threats they face and how everyone can contribute to their conservation, and browse the exhibition banners. In addition, a colouring and origami area for children is being offered and of course plenty of information material to take home.

In Sweden Aquaria, situated in Stockholm's Djurgarden, will be host to an event organized by SAMBAH, Kolmarden Djurpark and Aquaria. There will be a quiz walk with nice prizes, a painting contest for children, balloons, and the SAMBAH service ship and crew will be present and provide information on the project.

The Gothenburg Natural History Museum and the Swedish Agency for Marine and Water Management (SwAM) in collaboration with SAMBAH and Kolmarden Djurpark are organizing various activities for the IDBHP. A frozen harbour porpoise, which had stranded on the Swedish west coast will be put on display. The specimen was collected in order to determine the cause of death and test for environmental toxins. A harbour porpoise skull will also be presented to visitors, as well as a slide show of harbour porpoises with click sounds. Some short lectures about the species, its conservation status, the threats it faces, current research and conservation measures for harbour porpoises and their habitats will be delivered. The Museum also features a unique Whale Hall.

Information about IDBHP events of the past is contained in the Handbook, which can be downloaded here. All participating institutions are encouraged to report back to the Secretariat about their events. We will put a short report on the activities on this website and include the information and photos in the next update of the Handbook.