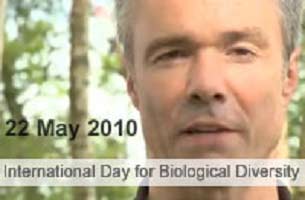 21 May 2010 - The German actor and conservationist, Hannes Jaenicke, has released a message on the International Day of Biodiversity to highlight the plight of endangered migratory species worldwide.
He started a series of documentaries on endangered animals as a public appeal for active commitment towards conservation. Following his films on orang utans and polar bears, his most recent one "Wildlife Underground Sharks" was launched at the Berlin Film Festival in February. At the same time, CMS concluded the first global agreement on sharks. Jaenicke's environmental credentials include winning the DIVA Earth Award. Hannes Jaenicke is also supporting the Convention on Migratory Species in his capacity as chair of the German charity "Friends of CMS".