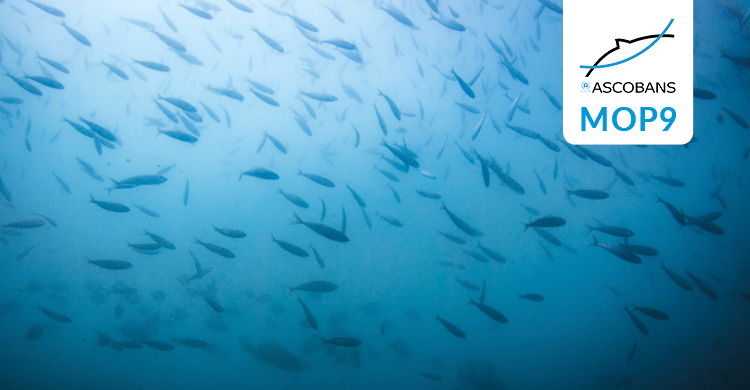 Bonn, 18 August 2020 – Small cetacean distributions are influenced by the distribution and diversity of their main prey species and there is evidence that prey depletion is posing a threat to small cetaceans within the ASCOBANS Agreement Area.  The quality and quantity of the prey have a considerable bearing on the health of small cetaceans, and the deterioration of both is a serious concern.

Of particular concern is the deteriorating state of the Baltic ecosystem with widespread poor oxygen conditions in deep water,  and the unfavourable status of a number of stocks of fish species that are important prey for small cetaceans, including the Iberian Sardine, herring that spawn in the late spring in the Western Baltic, cod throughout much of the Baltic, and sand eels, cod and whiting in the North Sea.

“Small cetaceans have relatively high metabolic rates, especially the smallest species, hence need to feed regularly and frequently, and are thus particularly susceptible to the effects of prey depletion. The depleted state of some European fish stocks and the unexplained poor body condition seen in some stranded dolphins and porpoises (i.e. in cases where there was no evidence of serious disease, etc.) suggest that this issue requires urgent investigation.”

In response to climate change and warming seas, the range of several small cetacean species also appear to have shifted northward, possibly linked to the changing availability of prey but potentially increasing the hazards experienced by these animals.

In accordance with a request made at the 24th Meeting of the ASCOBANS Advisory Committee (AC24), the Resource Depletion Working Group (RDWG) has been established.  The areas of expertise included in the RDWG include veterinary and fishery science, as well as cetacean ecology and conservation (e.g. collection and analysis of samples from stranded animals and determination of causes of death, dietary and feeding ecology studies, management and governance). The Working Group’s members come from the University of Utrecht (the Netherlands), the University of La Rochelle (France), Bangor University’s School of Ocean Sciences (UK), Seafish (UK), the Joint Nature Conservation Committee (UK), Instituto de Investigaciones Marinas (Vigo, Spain), Scotland’s Rural College (UK), the Ministry of Maritime Economy and Inland Navigation (Poland), Massey University (New Zealand), Wageningen University and Research (the Netherlands), Humane Society International (UK), and Galway-Mayo Institute of Technology (Ireland).  The terms of reference of the RDWG including the tasks assigned to it can be found here.

In response to a request made by AC25, the RDWG has drafted a resolution for consideration at the forthcoming Ninth Meeting of the Parties (MOP9), which is being held online from 7 to 11 September.  The draft resolution, based on the deliberations of the RDWG, can be found here.