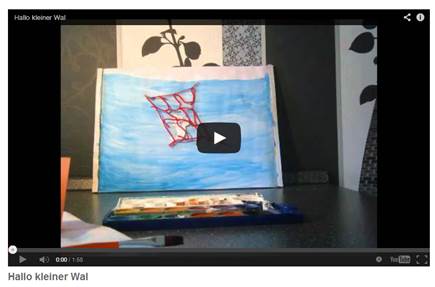 Berlin/Munich, 10 December 2013 – ASCOBANS, together with the environmental organizations NABU, Whale and Dolphin Conservation, and OceanCare, today announced the winner of the creativity competition “the Last 300”.

The public interest in the competition which aimed to highlight the plight of the Baltic Harbour Porpoise, proved that many people in Germany identified with “their whale species”. The Harbour porpoise, the only species of whale found regularly in German waters, faces threats from underwater noise, overfishing of its prey, bycatch and destruction of its habitat. It is feared that there might only be 300 of the creatures left, hence the name of the competition.
The winner of the competition was 15-year-old Laura Stattkus, who produced a stop motion film entitled “Hello, little whale”. Her prize was € 500 in cash and a trip to the island of Fehmarn.

All entries, including the three winners, can be viewed on the German-language website www.schweinswal.eu.

The full press release (in German) can be found here