World Wildlife Day – Life below Water: for People and the Planet 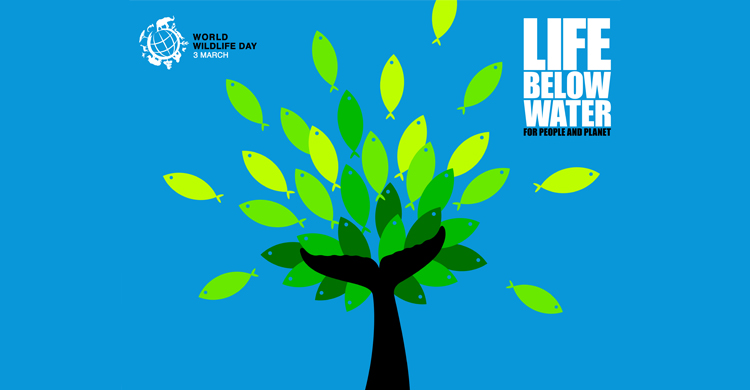 World Wildlife Day 2019: Life below Water : for People and the Planet

Bonn, 28 February 2019 – the theme of this year’s World Wildlife Day campaign is “Life below Water: for People and the Planet” and is closely aligned to the 14th Sustainable Development Goal (SDG14), which aims to conserve and sustainably use the oceans, seas and marine resources.

“The World Wildlife Day campaign theme this year is highly relevant to CMS, given the many migratory marine species listed on the Convention’s appendices and the number of specialized CMS Agreements and initiatives focusing on a range of marine species including cetaceans, sirenians, seals, marine turtles and sharks.”

Melanie Virtue, Head of the Aquatic Species Team at the CMS Secretariat

A number of instruments concluded under CMS deal with aquatic species. These include two intergovernmental agreements dealing with the conservation of cetaceans in the Mediterranean and Black Seas (ACCOBAMS) and in the Baltic, North East Atlantic, Irish and North Seas (ASCOBANS) and another concerning seals in the Wadden Sea. Memoranda of Understanding (MOU) have also been concluded for the conservation of species and regions as diverse as Sharks, Pacific Island Cetaceans, West African Aquatic Mammals, the Eastern Atlantic populations of the Mediterranean Monk Seal, the Dugong, and marine turtles in the Indian Ocean and South East Asia (IOSEA) and along the Atlantic coast of Africa.  CMS is also involved in regional efforts to conserve the European Eel, which along with its American relative, has undergone a drastic decline in numbers recently.

CMS has a long track record of securing action to tackle problems such as bycatch, which affects a broad range of marine species, as well as marine noise, ghost nets and other debris and more recently, the “plastic plague”.  World Wildlife Day provides an opportunity to raise these issues and the importance of conserving the world’s precious wild animals, including endangered migratory ones.

World Wildlife Day 2019 will be marked by a series of events and media activities around the world, including a high-level event at UN Headquarters in New York on Friday, 1 March. As part of these activities, the Convention on International Trade in Endangered Species of Wild Fauna and Flora (CITES) and the United Nations Development Programme (UNDP) have entered a partnership with the Jackson Hole WILD to organize an international film showcase focusing on marine species to help raise awareness of the importance of life below water to our everyday lives.

The International Fund for Animal Welfare will also host a youth art contest to engage school-aged children and help them build a sense of connection with the marine world. Winners of the Living Oceans Film Showcase and the youth art contest will be announced at the high-level event in UN Headquarters.

“Oceans regulate our climate, produce half the oxygen we breathe, provide nourishment for 3+ billion people, and absorb 30 per cent of carbon dioxide released into the atmosphere and fully 90 per cent of the heat from climate change. To ensure that oceans and marine species are preserved and protected, nature-based solutions that bring together public, private and civil society partners need to be replicated and scaled-up.”

Melanie Virtue and Tine Lindberg-Roncari of the CMS Secretariat attended the World Wildlife Day celebrations in New Delhi.  They were in India liaising with the Government over arrangements for next year’s CMS Conference of the Parties (CMS COP13), due to take place in Gandhinagar, Gujarat in February 2020.  Melanie was one of the principal speakers at a World Wildlife Day educational event for school children held at the Delhi Zoological Gardens.

More information about World Wildlife Day can be found on the CITES website. A more detailed explanation of the theme and an outline of some of the key activities were set out in a Press Release issued by the CITES Secretariat on 19 November last year.