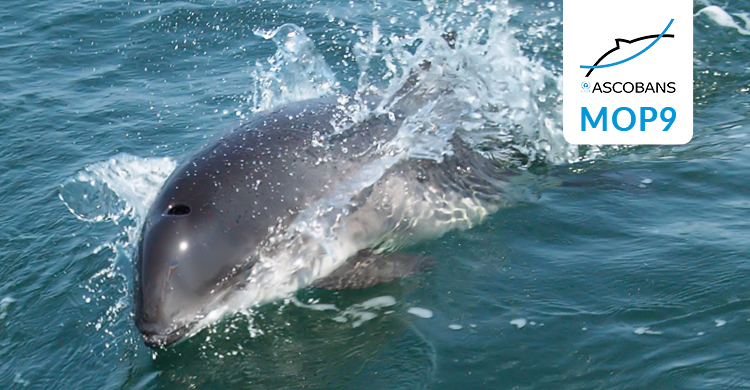 Bonn, 10 August 2020 – Last assessed in 2008, the Baltic Proper sub-population of the Harbour Porpoise (Phocoena phocoena) was categorized as Critically Endangered on the IUCN Red List, and the population is thought to number only a few hundred.

The greatest threats facing the Baltic Harbour Porpoise are bycatch, prey depletion, and disturbance from underwater noise along the busy shipping lanes of the Baltic Sea.

In July 2019, a coalition of 27 non-governmental organizations drew the attention of the European Commission to the status of the Harbour Porpoises in the Baltic Sea. As a result, the European Commission requested the International Council for the Exploration of the Sea (ICES) to provide advice on appropriate emergency measures.  ICES published the Special Request Advice on emergency measures to prevent bycatch of common dolphin and Baltic Proper Harbour porpoise in the Northeast Atlantic in May 2020.

In June 2020, the 16th meeting of the ASCOBANS Jastarnia Group, the steering group responsible for overseeing the ASCOBANS recovery plan for the Baltic Harbour Porpoise (and the conservation plan for the Harbour Porpoise population in the Western Baltic, the Belt Sea and the Kattegat), discussed the advice from ICES and sent its technical and scientific comments to the Directorates General at the Commission responsible for the environment and the sea (DG ENV and DG MARE).

“We are very pleased with the ICES advice and we hope that the Baltic Sea countries will implement the measures proposed in full, and for the long-term, so that the Baltic Proper harbour porpoise population is finally given a chance to recover.”

A Draft Resolution is being submitted to the 9th Meeting of the Parties to ASCOBANS by the Jastarnia Group.  This draft resolution urges Parties to implement the ICES recommendations, to put in place long-term bycatch mitigation measures, to implement monitoring of fishing effort and bycatch, and to use Best Available Techniques and Best Environmental Practice to prevent injuries to Harbour Porpoises and reduce disturbance from impulsive noise sources.

While a proposal to add the Baltic Proper and Iberian Harbour Porpoise population to CMS Appendix I at the Conference of the Parties in February 2020 did not materialize, CMS Parties did adopt a Concerted Action.