The Atlantic white-sided dolphin was only recognized as a separate species in 1846. Earlier finds remain unclear because they were sometimes confused with bottlenose (Tursiops truncatus) or common dolphins (Delphinus spp.).

Atlantic white-sided dolphins are large and robust animals with a short thick snout grading smoothly into the forehead and a tall curved dorsal fin. They are more colourful than most other dolphins: the back, flippers, fluke and the dorsal fin are black, the sides are lighter grey and a white patch on the side extends from below the dorsal fin and continues toward the tail. The thick tailstock has a striking yellow band. Males can reach a maximum body length of 2.7 metres and a weight of 230 kg.

The number of dolphins observed in a group varies from a few individuals up to several hundred but typical inshore groups around the British Isles contain less than 10 individuals.

Atlantic white-sided dolphins feed opportunistically on schooling fish (herring, mackerel, smelt and gadid fish as well as squid). Recent analyses of stomach contents indicate that their prey varies depending on their location and the time of year.

The SCANS II Project estimates about 12,000 individuals for the ASCOBANS area but may be somewhat inaccurate due to confusion with white-beaked dolphins in aerial surveys.

Incidental entanglement in fishing gear occurs regularly in mid-water and pelagic trawl nets. Pollution and underwater noise are of additional concern.  The species is currently hunted in the Faroe Islands and in parts of eastern Canada and Greenland.  Historically many were killed in fisheries in Norway, Newfoundland, Greenland, and the Faroe Islands.

More information on the Atlantic white-sided dolphin can be found at
http://www.cms.int/reports/small_cetaceans/data/l_acutus/l_acutus.htm. 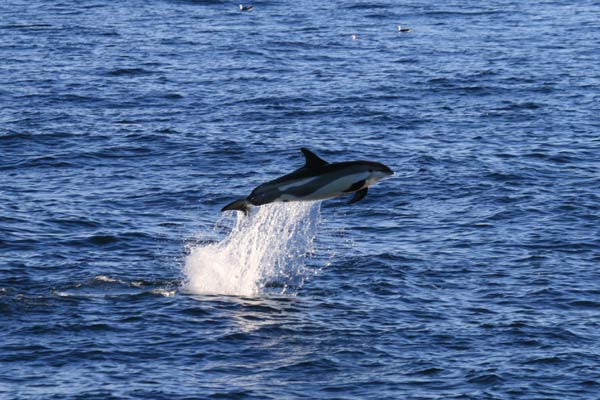