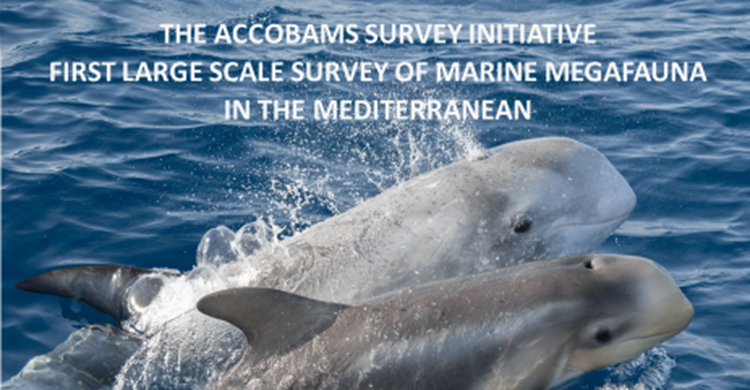 Bonn, 11 December 2018 - The Agreement on the Conservation of Cetaceans of the Black Sea, the Mediterranean Sea and Contiguous Atlantic area (ACCOBAMS), member of the CMS family, developed the “ACCOBAMS Survey Initiative” (ASI) aimed at establishing an integrated and coordinated monitoring system for cetaceans throughout the ACCOBAMS area.

An unprecedent large-scale synoptic survey combining visual and passive acoustic monitoring methods was conducted during the summer 2018 across the whole Mediterranean, involving a large international team alongside local scientists. The survey followed a multispecies approach, with cetaceans as primary targets, collecting data on elasmobranches, other mega-vertebrates but also on anthropic pressure such as marine litter.

The ASI final goal is to obtain an overall picture of the distribution and abundance of cetaceans throughout the entire ACCOBAMS Area and facilitate the development of targeted conservation and management measures.

It appeared that the ASI Mediterranean campaign was a truly unique opportunity to gather information on several species of cetaceans and on sharks and rays. While these data will be included in the global ASI data analysis process, the ACCOBAMS Secretariat is developing a data management system and looks forward to promoting data sharing and reinforcing its collaboration with interested Organizations, in particular for “non-cetacean” data use.

Maps of the observations made during the ASI are now available for each species, taxa and objects encountered. This information, as well as the collected acoustic data, is being statistically processed and will provide robust abundance estimates and density maps of encountered species, as well as modelling of the preferred habitats.

On the occasion of the 3rd Meeting of the Signatories to the Sharks MOU in Monaco, ACCOBAMS is organising an ASI side event on Thursday, 13 December, during which the ASI survey preliminary results will be presented and opportunities for collaboration on data use will be discussed.